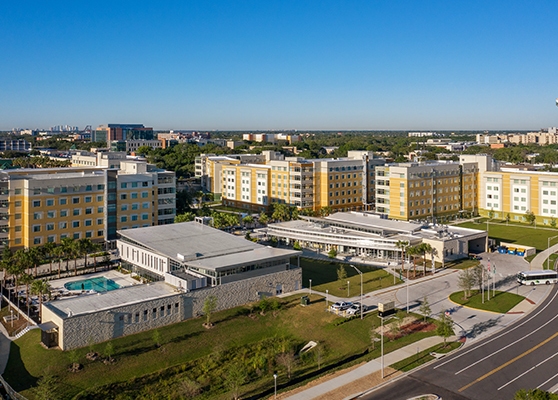 Student housing for the 21st century

In 2016, FINFROCK embarked on a mission to bring the University of South Florida over 540,000 square feet of space across five buildings, with 2,167 beds in just two years’ time. FINFROCK served as the architect of record, structural engineer, and design-build contractor for this six-story building. Phase one of USF Residential included 885 beds built within one school year. This was achieved by producing the precast concrete at FINFROCK and later shipping it to be assembled on-site at USF.

Project delivery was phased over two school years to limit the amount of existing inventory taken out of circulation during any one school year. Our innovative DualDeck® Building System was the catalyst for success with USF Residential, as it allowed us to incorporate subsystems into our precast during the manufacturing process.